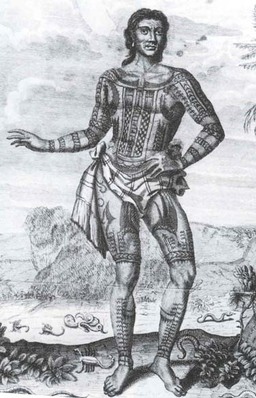 _    Tattooing has been a Eurasian practice at least since around Neolithic times. Ötzi the Iceman, dating from the fourth to fifth millennium BC, was found in the Ötz valley in the Alps and had approximately 57 carbon tattoos consisting of simple dots and lines on his lower spine, behind his left knee, and on his right ankle. These tattoos were thought to be a form of healing because of their placement which resembles acupuncture. Other mummies bearing tattoos and dating from the end of the second millennium BC have been discovered, such as the Mummy of Amunet from ancient Egypt and the mummies at Pazyryk on the Ukok Plateau.

Pre-Christian Germanic, Celtic and other central and northern European tribes were often heavily tattooed, according to surviving accounts. The Picts were famously tattooed (or scarified) with elaborate dark blue woad (or possibly copper for the blue tone) designs. Julius Caesar described these tattoos in Book V of his Gallic Wars (54 BC).

Tattooing in Japan is thought to go back to the Paleolithic era, some ten thousand years ago. Various other cultures have had their own tattoo traditions, ranging from rubbing cuts and other wounds with ashes, to hand-pricking the skin to insert dyes.

Tattooing in the Western world today has its origins in Polynesia, and in the discovery of tatau by eighteenth century explorers. The Polynesian practice became popular among European sailors, before spreading to Western societies generally.

The Oxford English Dictionary gives the etymology of tattoo as "In 18th c. tattaow, tattow. From Polynesiantatau. In Tahitian, tatu." The word tatau was introduced as a loan word into English, the pronunciation being changed to conform to English phonology as "tattoo". Sailors on later voyages both introduced the word and reintroduced the concept of tattooing to Europe.

Tattoo enthusiasts may refer to tattoos as "Ink", "Tats", "Art", "Pieces", or "Work"; and to the tattooists as "Artists". The latter usage is gaining greater support, with mainstream art galleries holding exhibitions of both conventional and custom tattoo designs. Beyond Skin, at the Museum of Croydon, is an example of this as it challenges the stereotypical view of tattoos and who has them. Copyrighted tattoo designs that are mass-produced and sent to tattoo artists are known as flash, a notable instance of industrial design. Flash sheets are prominently displayed in many tattoo parlors for the purpose of providing both inspiration and ready-made tattoo images to customers.

In Taiwan, facial tattoos of the Atayal tribe are named "Badasun"; they are used to demonstrate that an adult man can protect his homeland, and that an adult woman is qualified to weave cloth and perform housekeeping.

The anthropologist Ling Roth in 1900 described four methods of skin marking and suggested they be differentiated under the names of tatu, moko, cicatrix, and keloid. 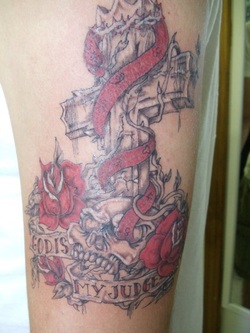 _    Tattoos have experienced a resurgence in popularity in many parts of the world, particularly in North and South America, Japan, and Europe. The growth in tattoo culture has seen an influx of new artists into the industry, many of whom have technical and fine arts training. Coupled with advancements in tattoo pigments and the ongoing refinement of the equipment used for tattooing, this has led to an improvement in the quality of tattoos being produced.

During the first decade of the 21st century, the presence of tattoos became evident within pop culture, inspiring television shows such as A&E's Inked and TLC's Miami Ink and LA Ink. The decoration of blues singer Janis Joplin with a wristlet and a small heart on her left breast, by the San Francisco tattoo artist Lyle Tuttle, has been called a seminal moment in the popular acceptance of tattoos as art. Formal interest in the art of the tattoo became prominent in the 1990s through the beginning of the 21st century. Contemporary art exhibitions and visual art institutions have featured tattoos as art through such means as displaying tattoo flash, examining the works of tattoo artists, or otherwise incorporating examples of body art into mainstream exhibits. One such 2009 Chicago exhibition Freaks & Flash featured both examples of historic body art as well as the tattoo artists who produced it.

In many traditional cultures tattooing has also enjoyed a resurgence, partially in deference to cultural heritage. Historically, a decline in traditional tribal tattooing in Europe occurred with the spread of Christianity. However, some Christian groups, such as the Knights of St. John of Malta, sported tattoos to show their allegiance. A decline often occurred in other cultures following European efforts to convert aboriginal and indigenous people to Western religious and cultural practices that held tattooing to be a "pagan" or "heathen" activity. Within some traditional indigenous cultures, tattooing takes place within the context of a rite of passage between adolescence and adulthood.

Tattooing has become a fad among celebrities. David Beckham, an international soccer star, caught tattoo ‘fever’ beginning with the birth of his first son back in 1999 when he had Malloy ink his son’s name, “Brooklyn” at the bottom of his back. Then he had the first part of his guardian angel inked on his back. This was followed up in 2000, with his wife’s name being misspelled in Hindi on his left arm. 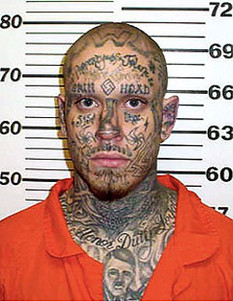 _    In Japan, tattoos are strongly associated with organized crime organizations known as the Yakuza, particularly full body tattoos done the traditional Japanese way (Tebori). Many public Japanese bathhouses (sentō) and gymnasiums often openly ban those bearing large or graphic tattoos in an attempt to prevent Yakuza from entering. The Government of Meiji Japan had outlawed tattoos in the 19th century, a prohibition that stood for 70 years before being repealed in 1948.

In the United States many prisoners and criminal gangs use distinctive tattoos to indicate facts about their criminal behavior, prison sentences, and organizational affiliation. A teardrop tattoo, for example, can be symbolic of murder, with each tear representing the death of a friend. At the same time, members of the U.S. military have an equally well established and longstanding history of tattooing to indicate military units, battles, kills, etc., an association which remains widespread among older Americans. Tattooing is also common in the British Armed Forces.

Tattooing was also used by the Nazi regime in Nazi concentration camps to tag prisoners.

Insofar as this cultural or subcultural use of tattoos predates the widespread popularity of tattoos in the general population, tattoos are still associated with criminality. Tattoos on the face in the shape of teardrops are usually associated with how many people a person has murdered. Although the general acceptance of tattoos is on the rise in Western society, they still carry a heavy stigma among certain social groups. Tattoos are generally considered an important part of the culture of the Russian mafia.

The prevalence of women in the tattoo industry, along with larger numbers of women bearing tattoos, appears to be changing negative perceptions. A study of "at-risk" (as defined by school absenteeism and truancy) adolescent girls showed a positive correlation between body-modification and negative feelings towards the body and self-esteem; however, also illustrating a strong motive for body-modification as the search for "self and attempts to attain mastery and control over the body in an age of increasing alienation." 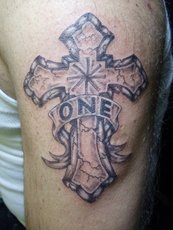 The majority of Christians do not take issue with the practice, while a minority uphold the Hebrew view against tattoos based on Leviticus 19:28. Tattoos of Christian symbols are common. When on pilgrimage, some Christians get a small tattoo dating the year and a small cross. This is usually done on the forearm.

There is no prohibition against tattoo within the Catholic Church, provided that the tattoo is not an image that is sacrilegious, blasphemous, or obscene. At the Catholic council of Calcuth in Northumberland in A.D. 786, Christians who received a tattoo "for the sake of God" (i.e., a religious tattoo in the form of a cross, a monogramme of Christ, or a saint's name or image) were commended as praiseworthy.

Catholic Croats of Bosnia and Herzegovina used tattooing, especially of children, for perceived protection against forced conversion to Islam during Turkish occupation of Bosnia and Herzegovina (1463-1878). This form of tattooing continued long past its original motivation, though it was forbidden during Yugoslavian communism. Tattooing was performed during spring time or during special religious celebrations such as the Feast of St. Joseph, and consisted mostly of Christian crosses on hands, fingers, forearms, and below the neck and on the chest.

Coptic Christians who live in Egypt tattoo themselves with the symbols of Coptic crosses on their right wrists.

_    Tattoos are considered forbidden in Sunni Islam. According to the book of Sunni traditions, Sahih Bukhari, "The Prophet forbade mutilation (or maiming) of bodies." Sunni Muslims believe tattooing is forbidden and a sin because it involves changing the creation of God (Surah 4 Verse 117-120), and because the Prophet cursed the one who does tattoos and the one for whom that is done. There is, however, difference of scholarly Sunni Muslim opinion as to the reason why tattoos are forbidden.

_    Tattoos are forbidden in Judaism based on the Torah (Leviticus 19:28): "You shall not make gashes in your flesh for the dead, or incise any marks on yourselves: I am the Lord." The prohibition is explained by contemporary rabbis as part of a general prohibition on body modification that does not serve a medical purpose (such as to correct a deformity). Maimonides, a leading 12th century scholar of Jewish law and thought, explains the prohibition against tattoos as a Jewish response to paganism.

Since it was common practice for ancient pagan worshipers to tattoo themselves with religious iconography and names of gods, Judaism prohibited tattoos entirely in order to disassociate from other religions. In modern times, the association of tattoos with Nazi concentration camps and the Holocaust has given an additional level for revulsion to the practice of tattooing, even among many otherwise fairly secular Jews. It is a common misconception that anyone bearing a tattoo is not permitted to be buried in a Jewish cemetery. 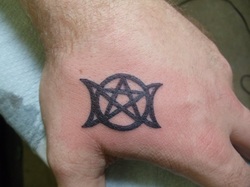 _    Neopagans can use the process and the outcome of tattooing as an expression or representation of their beliefs. Many tattooists' websites offer pagan images as examples of the kinds of artwork they provide.