What is a Piercing? 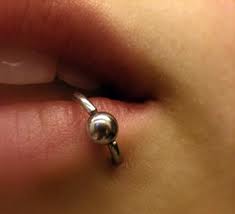 _    Tattooing involves the placement of pigment into the skin's dermis, the layer of dermal tissue underlying the epidermis. After initial injection, pigment is dispersed throughout a homogenized damaged layer down through the epidermis and upper dermis, in both of which the presence of foreign material activates the immune system's phagocytes to engulf the pigment particles. As healing proceeds, the damaged epidermis flakes away (eliminating surface pigment) while deeper in the skin granulation tissue forms, which is later converted to connective tissue by collagen growth. This mends the upper dermis, where pigment remains trapped within fibroblasts, ultimately concentrating in a layer just below the dermis/epidermis boundary. Its presence there is stable, but in the long term (decades) the pigment tends to migrate deeper into the dermis, accounting for the degraded detail of old tattoos.

Some tribal cultures traditionally created tattoos by cutting designs into the skin and rubbing the resulting wound with ink, ashes or other agents; some cultures continue this practice, which may be an adjunct to scarification. Some cultures create tattooed marks by hand-tapping the ink into the skin using sharpened sticks or animal bones (made like needles) with clay formed disks or, in modern times, needles. Traditional Japanese tattoos (Horimono) are still "hand-poked," that is, the ink is inserted beneath the skin using non-electrical, hand-made and hand held tools with needles of sharpened bamboo or steel. This method is known as tebori.

Traditional Hawaiian hand-tapped tattoos are experiencing a renaissance, after the practice was nearly extinguished in the years following Western contact. The process involves lengthy protocols and prayers and is considered a sacred rite more than an application of artwork. The tattooist chooses the design, rather than the wearer, based on genealogical information. Each design is symbolic of the wearer's personal responsibility and role in the community. Tools are hand-carved from bone or tusk without the use of metal.

The most common method of tattooing in modern times is the electric tattoo machine, which inserts ink into the skin via a single needle or a group of needles that are soldered onto a bar, which is attached to an oscillating unit. The unit rapidly and repeatedly drives the needles in and out of the skin, usually 80 to 150 times a second. This modern procedure is ordinarily sanitary. The needles are single-use needles that come packaged individually. The tattoo artist must wash not only his or her hands, but he or she must also wash the area that will be tattooed. Gloves must be worn at all times and the wound must be wiped frequently with a wet disposable towel of some kind. The equipment must be sterilized in a certified autoclave before and after every use.

Prices for this service vary widely globally and locally, depending on the complexity of the tattoo, the skill and expertise of the artist, the attitude of the customer, the costs of running a business, the economics of supply and demand, etc. The time it takes to get a tattoo is in proportion with its size and complexity. A small one of simple design might take fifteen minutes, whereas an elaborate sleeve tattoo or back piece requires multiple sessions of several hours each.

The modern electric tattoo machine is far removed from the machine invented by Samuel O'Reilly in 1891. O'Reilly's machine was based on the rotary technology of the electric engraving device invented by Thomas Edison. Modern tattoo machines use electromagnetic coils. The first coil machine was patented by Thomas Riley in London, 1891 using a single coil. The first twin coil machine, the predecessor of the modern configuration, was invented by another Englishman, Alfred Charles South of London, in 1899.

_    Reasons for piercing vary greatly. A 2001 survey in Clinical Nursing Research, an international publication, found that 62% of people who pierced had done so in an effort "to express their individuality." People also pierce to commemorate landmark events or to overcome traumatic ones. According to the assistant director of the Frankfurt University Teaching Hospital for Psychosomatic Medicine and Psychotherapy, some sexual abuse survivors choose body piercing as a means of "reclaiming body parts from memories of abuse".

Piercing can also be chosen for simple aesthetic value, to highlight particular areas of the body, as a navel piercing may reflect a woman's satisfaction with the shape and condition of her stomach. Some people pierce, permanently or temporarily, to enhance sexual pleasure. Genital and nipple piercings may increase sexual satisfaction. Some people participate in a form of body play known as play piercing, in which piercings may be done temporarily on the genitals or elsewhere on the body for sexual gratification.

Piercing combined with suspension was historically important in the religious ceremonies of some Native Americans, featuring in many variants of the Sun Dance ceremony, including that practiced by the Crow Nation. During the Crow ceremony, men who wished to obtain visions were pierced in the shoulders or chest by men who had undergone the ceremony in the past and then suspended by these piercings from poles in or outside of the Sun Dance Lodge. Some contemporary Southeast Asian rituals also practice body piercing, as a form of spiritual self-mortification. Generally, the subject attempts to enter an analgesic trance prior to the piercing.

Bridging the gap between self-expressive piercing and spiritual piercing, modern primitives use piercing and other forms of body modification as a way of ritually reconnecting with themselves and society, which according to Musafar once used piercing as a culturally binding ritual. But at the same time that piercing can be culturally binding, it may also be a means of rebellion, particularly for adolescents in Western cultures.

A fifteen year analysis published in 2011, Body Piercing and Identity Construction found that public piercing served as a mechanism of both accelerated camaraderie and political communication, while private piercings served to enhance sexuality and contest heteronormativity. 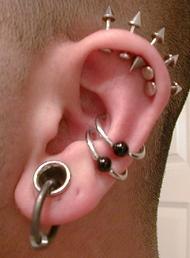 _    Body piercing jewellery should be hypoallergenic. A number of materials are used, with varying strengths and weaknesses. Surgical stainless steel, niobium and titanium are commonly used metals, with titanium the least likely to cause allergic reaction of the three. Platinum and palladium are also safe alternatives, even in fresh piercings. Initial piercings should never be done with gold of any grade, as gold is mixed with other metals, and sterling silver is not a good alternative in a piercing, as it may cause allergies in initial piercings and will tarnish in piercings of any age. An additional risk for allergic reaction may arise when the stud or clasp of jewellery is made from a different metal than the primary piece.

Body piercing jewellery is measured by thickness and diameter/length. Most countries use millimeters. In the USA, the Brown & Sharpe AWG gauging system is used, which assigns lower numbers to thicker middles. 00 gauge is 9.246 millimetres (0.3640 in), while 20 gauge is 0.813 millimetres (0.0320 in).

_    Permanent body piercings are performed by creating an opening in the body using a sharp object through the area to be pierced. This can either be done by puncturing an opening using a needle (usually a hollow medical needle) or scalpel or by removing tissue, either with a dermal punch or through scalpelling.

Tools used in body piercing include:

_    The standard method in the United States involves making an opening using a beveled-tip hollow medical needle, which is available in different lengths, gauges and even shapes. While straight needles are useful for many body parts, curved needles are manufactured for areas where straight needles are not ideal. The needle selected is typically the same gauge (or sometimes larger as with cartilage piercings) as the initial jewellery to be worn, with higher gauges indicating thinner needles. The needle is inserted into the body part being pierced, frequently by hand but sometimes with the aid of a needle holder or pusher. While the needle is still in the body, the initial jewellery to be worn in the piercing is pushed through the opening, following the back of the needle. Jewellery is often inserted into the hollow end of a needle, so that as the needle pulls through the jewellery is left behind.

_    Outside of the United States, many piercers use a needle containing a cannula (or catheter), a hollow plastic tube placed at the end of the needle. In some countries, the piercing needle favored in the United States is regarded as a medical device and is illegal for body piercers. The procedure is similar to the piercing needle method, but the initial jewellery is inserted into the back of the cannula and the cannula and the jewellery are then pulled through the piercing. More bleeding may follow, as the piercing is larger than the jewellery.

_    A dermal punch is used to remove a circular area of tissue, into which jewellery is placed, and may be useful for larger cartilage piercings. They are popular for use in ears, though not legal for use by nonmedical personnel in some parts of the United States.

_    Piercing guns, which were originally developed for tagging livestock, are typically used for ear piercing, but may be used for other body parts as well. Piercing guns are generally not favoured by professional body piercers. Guns use relatively blunt, solid studs that punch through tissue; thus they cause more trauma to tissue than proper piercing needles, which are sharp and hollow. They are also considered unsuitable for hygienic reasons. Piercing with a piercing gun causes microsprays of plasma and blood; the guns frequently contain plastic components which are unable to be cleaned in an autoclave system, while surface cleansers do not kill all bacteria. Piercing guns are frequently encountered in retail outlets, where those wielding them may be inadequately trained. The Association of Professional Piercers recommends that piercing guns not be used for any piercing, including ears. Nevertheless, the vast majority of women in the west have their ears pierced with a piercing gun.

_    Cork may be placed on the opposite side of the body part being pierced to receive the needle.

Forceps, or clamps, may be used to hold and stabilize the tissue to be pierced. Most piercings that are stabilized with forceps use the triangular-headed "Pennington" forcep, while tongues are usually stabilized with an oval-headed forcep. Most forceps have large enough openings in their jaws to permit the needle and jewellery to pass directly through, though some slotted forceps are designed with a removable segment instead for removal after the piercing. Forceps are not used in the freehand method, in which the piercer supports the tissue by hand.

A hollow tube made of metal, shatter-resistant glass or plastic, needle     receiving tubes, like forceps, are used to support the tissue at the piercing site and are common in septum and some cartilage piercings. Not only are these tubes intended to support the tissue, but they also receive the needle once it has passed through the tissue, offering protection from the sharp point. Needle receiving tubes are not used in the freehand piercing method.

Anesthesia is supplied by some piercers, particularly in the United Kingdom and Europe. The anesthesia may be topical or injected. Piercers and other non-medical personnel are not legally permitted to administer anesthetics in the United States.