What is a Tattoo? 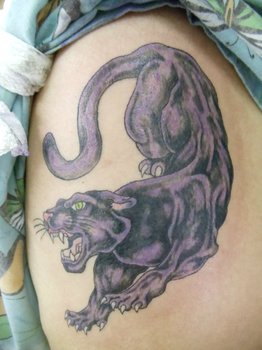 __    A tattoo is a form of body modification, made by inserting indelible ink into the dermis layer of the skin to change the pigment. The first written reference to the word, "tattoo" (or Samoan "Tatau") appears in the journal of Joseph Banks, the naturalist aboard Captain Cook's ship the HMS Endeavor in 1769: "I shall now mention the way they mark themselves indelibly, each of them is so marked by their humour or disposition".

Tattooing has been practiced for centuries in many cultures spread throughout the world. The Ainu, an indigenous people of Japan, traditionally had facial tattoos. Today one can find Berbers of Tamazgha (North Africa), Māori of New Zealand, Hausa people of Northern Nigeria, Arabic people in East-Turkey and Atayal of Taiwan with facial tattoos. Tattooing was widespread among Polynesian peoples and among certain tribal groups in the Taiwan, Philippines, Borneo, Mentawai Islands, Africa, North America, South America, Mesoamerica, Europe, Japan, Cambodia, New Zealand and Micronesia. Indeed, the island of Great Britain takes its name from tattooing, with Britons translating as 'people of the designs' and the Picts, who originally inhabited the northern part of Britain, literally meaning 'the painted people'. British people remain the most tattooed in Europe. Despite some taboos surrounding tattooing, the art continues to be popular in many parts of the world.

Since the 1990s, tattoos have become a mainstream part of global and Western fashion, common among both sexes, to all economic classes, and to age groups from the later teen years to middle age. By the 2010s, even the Barbie doll put out a tattooed Barbie in 2011, which was widely accepted, although it did attract some controversy. In 2010, around 2 in 5 (38%) of Millenials had tattoos in the United States and one-fourth (25%) of Australians under 30 had tattoos. 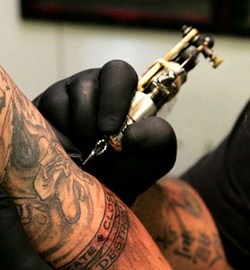 _    Tattooing involves the placement of pigment into the skin's dermis, the layer of dermal tissue underlying the epidermis. After initial injection, pigment is dispersed throughout a homogenized damaged layer down through the epidermis and upper dermis, in both of which the presence of foreign material activates the immune system's phagocytes to engulf the pigment particles.

As healing proceeds, the damaged epidermis flakes away (eliminating surface pigment) while deeper in the skin granulation tissue forms, which is later converted to connective tissue by collagen growth. This mends the upper dermis, where pigment remains trapped within fibroblasts, ultimately concentrating in a layer just below the dermis/epidermis boundary. Its presence there is stable, but in the long term (decades) the pigment tends to migrate deeper into the dermis, accounting for the degraded detail of old tattoos.

Some tribal cultures traditionally created tattoos by cutting designs into the skin and rubbing the resulting wound with ink, ashes or other agents; some cultures continue this practice, which may be an adjunct to scarification. Some cultures create tattooed marks by hand-tapping the ink into the skin using sharpened sticks or animal bones (made like needles) with clay formed disks or, in modern times, needles. Traditional Japanese tattoos (Horimono) are still "hand-poked," that is, the ink is inserted beneath the skin using non-electrical, hand-made and hand held tools with needles of sharpened bamboo or steel. This method is known as tebori.

Traditional Hawaiian hand-tapped tattoos are experiencing a renaissance, after the practice was nearly extinguished in the years following Western contact. The process involves lengthy protocols and prayers and is considered a sacred rite more than an application of artwork. The tattooist chooses the design, rather than the wearer, based on genealogical information. Each design is symbolic of the wearer's personal responsibility and role in the community. Tools are hand-carved from bone or tusk without the use of metal.

The most common method of tattooing in modern times is the electric tattoo machine, which inserts ink into the skin via a single needle or a group of needles that are soldered onto a bar, which is attached to an oscillating unit. The unit rapidly and repeatedly drives the needles in and out of the skin, usually 80 to 150 times a second. This modern procedure is ordinarily sanitary. The needles are single-use needles that come packaged individually. The tattoo artist must wash not only his or her hands, but he or she must also wash the area that will be tattooed. Gloves must be worn at all times and the wound must be wiped frequently with a wet disposable towel of some kind. The equipment must be sterilized in a certified autoclave before and after every use.

Prices for this service vary widely globally and locally, depending on the complexity of the tattoo, the skill and expertise of the artist, the attitude of the customer, the costs of running a business, the economics of supply and demand, etc. The time it takes to get a tattoo is in proportion with its size and complexity. A small one of simple design might take fifteen minutes, whereas an elaborate sleeve tattoo or back piece requires multiple sessions of several hours each.

The modern electric tattoo machine is far removed from the machine invented by Samuel O'Reilly in 1891. O'Reilly's machine was based on the rotary technology of the electric engraving device invented by Thomas Edison. Modern tattoo machines use electromagnetic coils. The first coil machine was patented by Thomas Riley in London, 1891 using a single coil. The first twin coil machine, the predecessor of the modern configuration, was invented by another Englishman, Alfred Charles South of London, in 1899.

_    Early tattoo inks were obtained directly from nature and were extremely limited in pigment variety. In ancient Hawaii, for example, kukui nut ash was blended with coconut oil to produce an ebony ink. Today, an almost unlimited number of colors and shades of tattoo ink are mass-produced and sold to parlors worldwide. Tattoo artists commonly mix these inks to create their own unique pigments.     A wide range of dyes and pigments can be used in tattoos, from inorganic materials like titanium dioxide and iron oxides to carbon black, azo dyes, and acridine, quinoline, phthalocyanine and naphthol derivates, dyes made from ash, and other mixtures. Iron oxide pigments are used in greater extent in cosmetic tattooing.

Modern tattooing inks are carbon based pigments that have uses outside of commercial tattoo applications. In 2005 at Northern Arizona University a study characterized the makeup of tattoo inks (Finley-Jones and Wagner). The FDA expects local authorities to legislate and test tattoo pigments and inks made for the use of permanent cosmetics. In California, the state prohibits certain ingredients and pursues companies who fail to notify the consumer of the contents of tattoo pigments.

There has been concern expressed about the interaction between magnetic resonance imaging (MRI) procedures and tattoo pigments, some of which contain trace metals. The magnetic fields produced by MRI machines interact with these metals, including nonferrous metal particles, and while rare, are capable of causing first-degree or second-degree burns or distortions in the image. The type and density of the ink as well as shape of the tattoo may increase the risk, particularly if the shape approximates an RF pick-up loop. The television show MythBusters tested the hypothesis, and found a slight interaction between commonly used tattoo inks and MRI. The interaction was stronger with inks containing high levels of iron oxide.